How Black Foragers Find Freedom in the Natural World

Foraging has opened their eyes not just to the possibilities of new food sources, but to the legacy of land separation.,

Alexis Nikole Nelson, known on TikTok as the @blackforager, enjoying her pursuit. Her interest started with her inclination to view trees as kinfolk.Credit…By Adraint Bereal For The New York Times

When Alexis Nikole Nelson was a kindergartner, she counted a honeysuckle tree among her most cherished friends.

She named the tree Priscilla, after her great-aunt. “I wasn’t especially adept at climbing trees,” she told me as we walked through the woods near her home in Columbus, Ohio. “But this tree grew in this curved way that it was perfectly manageable for me to just scamper up, sit in the branches and snack on some honeysuckle flowers.”

One might expect such an endearing origin story from Ms. Nelson, known to her 1.7 million TikTok followers as the Black Forager. An urban adventurer who roams everywhere from Central Park to areas closer to home, the 29-year-old makes short, exuberant videos about edible finds in the woods. She gathers unripe black walnuts for her version of the spiced Italian liqueur nocino and extols the virtues of milkweed, a favorite of monarch butterflies and the base of Ms. Nelson’s recipe for air-fried fritters. And it all started in those early years with her inclination to view trees as kinfolk.

Though there are no definitive statistics, foragers have informally reported an increase in the practice during the pandemic. “There are clearly new folks getting involved in the practice, and it seems to be for a variety of reasons,” said Patrick Hurley, professor and chair of Environmental Studies at Ursinus College, speaking of his local community in Philadelphia.

Ms. Nelson represents one part of an increasingly visible community. While many younger Black people didn’t grow up going to the woods to “shop,” they have learned about lesser-known fruits such as serviceberries and the common cold remedy burdock root through books or the internet.

Whether they’re herbalists, Great Migration grandbabies in search of Southern roots, shoppers slashing their food budgets, the only Black kid who went to 4-H camp back in the day, or home cooks who want to dazzle guests with a backyard-berry crostata, they’re often contending with conflicted histories of disconnection from the land — and a present in which they don’t always find nature a sanctuary.

The idea that Black people just don’t do the outdoors developed over time and centuries of dispossession, said Justin Robinson. An ethnobotanist, farmer and cultural historian in Durham, N.C., he rejects the term “foraging” and its practice as anything new to Black Americans and humans in general. He believes the word separates the world into a disturbing cultivated-versus-wild binary that doesn’t reflect reality.

Mr. Robinson links his love of the land and his work to the warm childhood years he spent following his two farmer grandfathers and the adult years he spent unconsciously replicating one of their gardens. But he knows that Black American history is also a series of profound land-related ruptures, starting with enslavement and forced agricultural labor on territory inhabited by — and taken from — Native peoples. The slave master’s meager rations turned the enslaved into naturalists out of both necessity and opportunity.

Slave narratives abound with references to tapping honey and finding food. In a 1937 Works Progress Administration interview, Charles Grandy of Norfolk, Va., spoke of his escape during the Civil War and how he subsisted on wild berries for days. Sharecropping and land loss — by physical and legal violence — followed. By the early 20th century, more Southern rural Black people were migrating to cities around the nation. Some swore never to look back or till the land again. 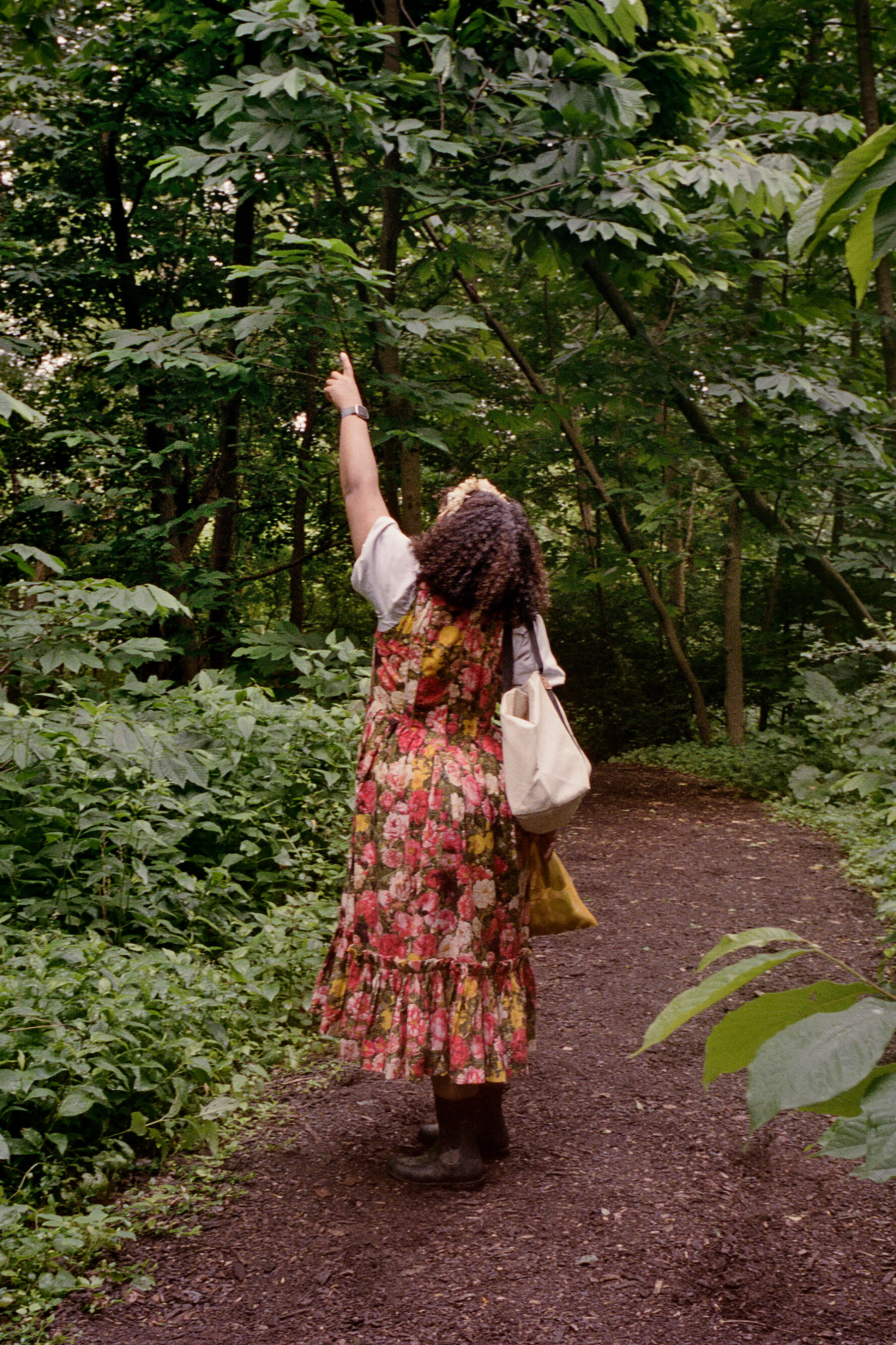 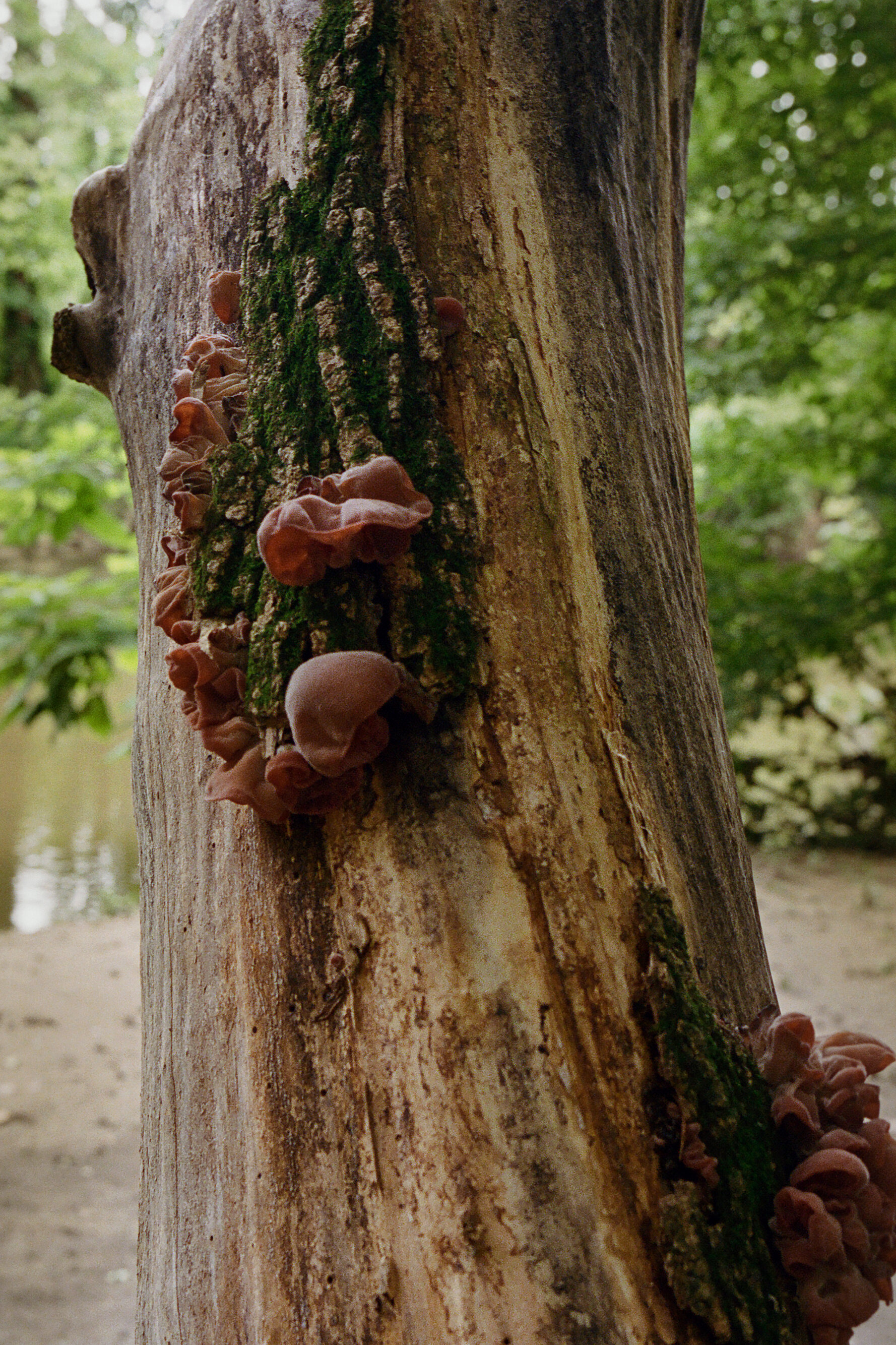 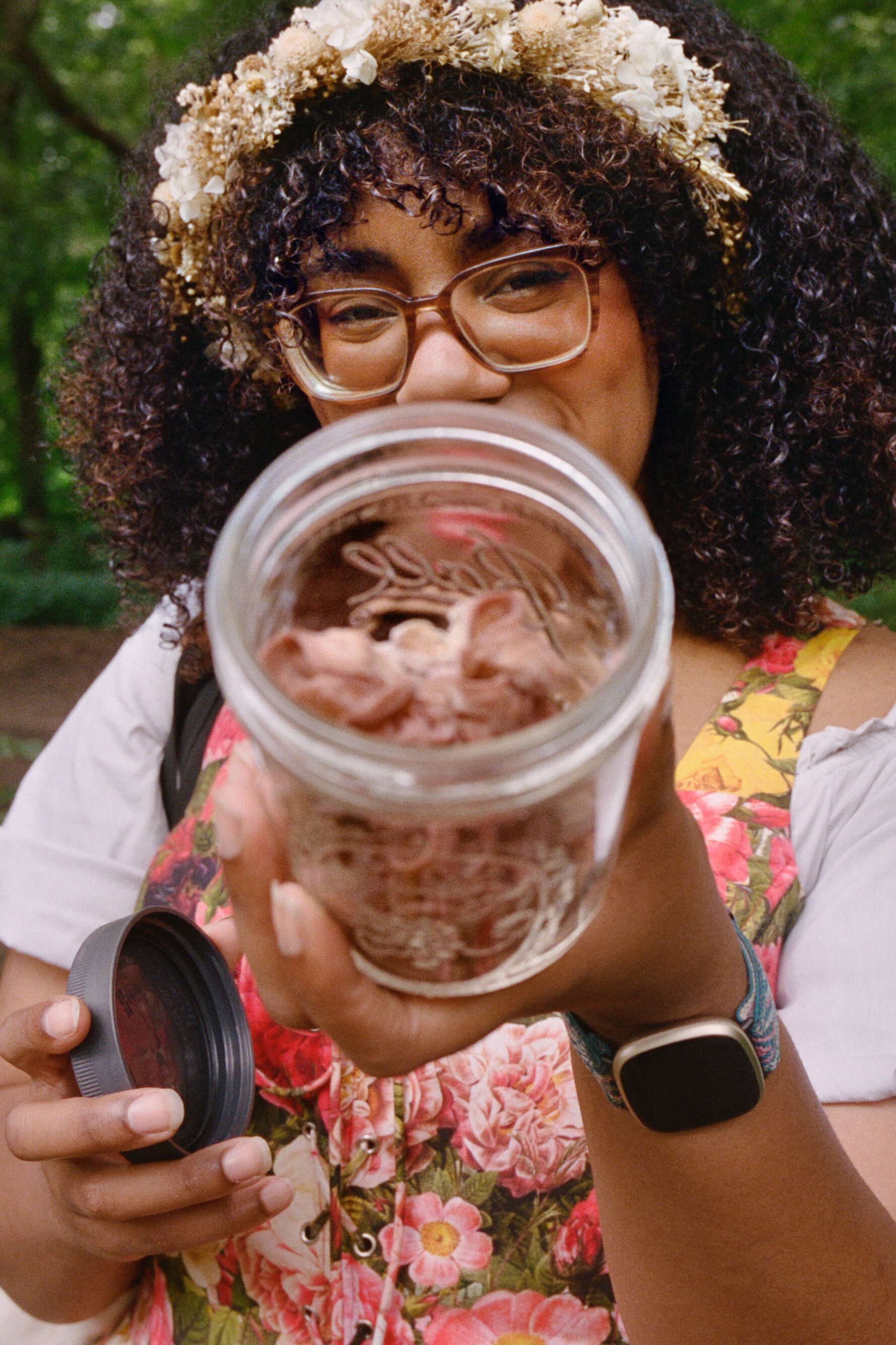 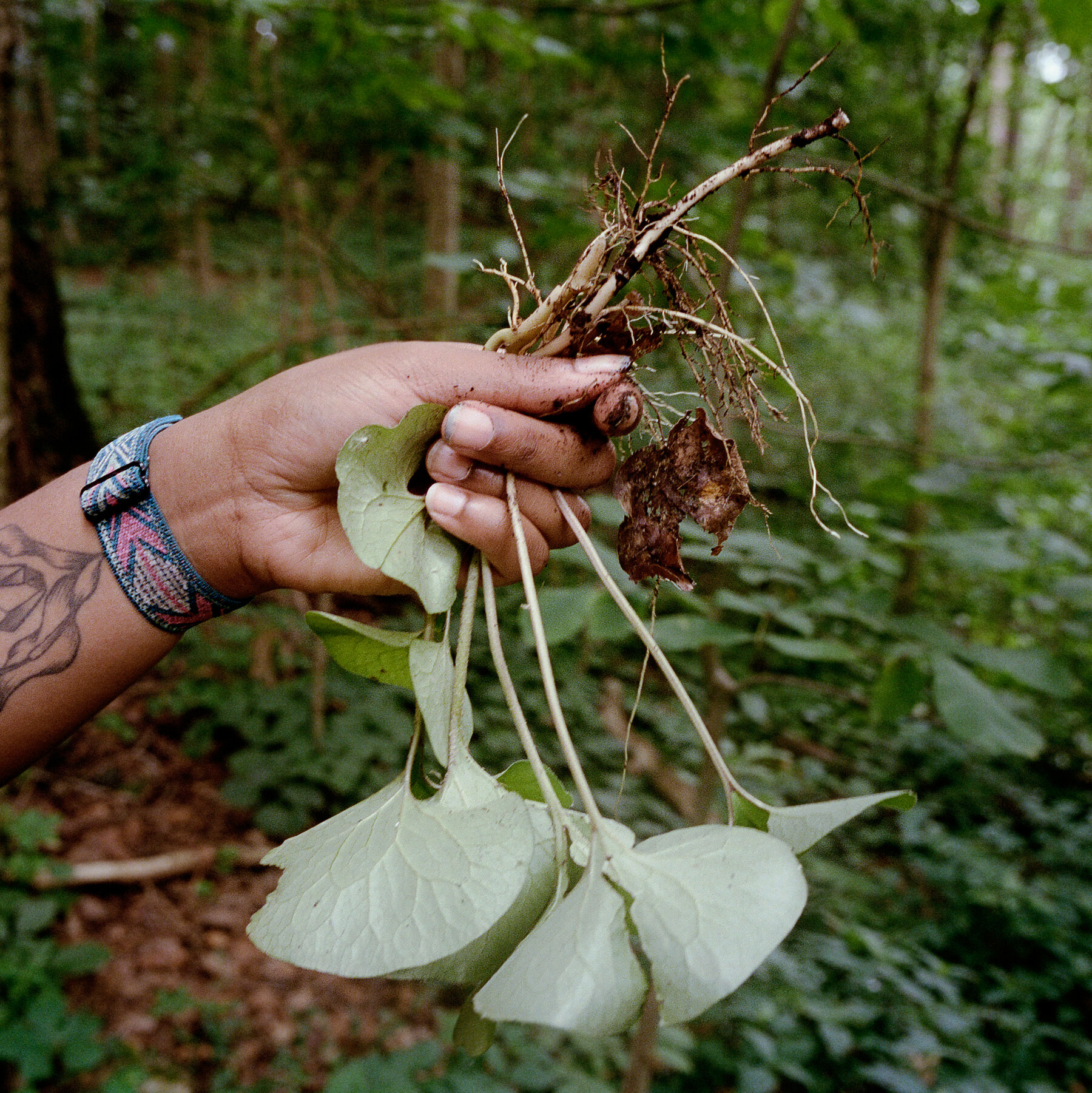 For some, to forage on the land is to see possibility.

In what untrained eyes see as walls of undifferentiated green, they can find sustenance …

… and links to their heritage.

As Mr. Robinson said, Black American history is a combination of “‘hood and country.” And Larry Gholston is holding down part of that rural heritage.

Come each May, Mr. Gholston eyes the cattle-yard a short distance from his home in Toccoa, Ga. He’s searching for something very specific — and, in its natural form, toxic: Phytolacca americana, the pokeweed plant native to the South and Appalachia. A 68-year-old retiree and community historian, Mr. Gholston is committed to preserving poke sallit, a dish made from pokeweed. For the past 30 years, he has been handpicking small, tender leaves for the Poke Sallit Festival that he holds every Memorial Day.

He’s trying to pass down his knowledge to younger people, including his 35-year-old son, Seth Gholston, who D.J.s the event while his father cooks: Seth can now easily spot the 10-foot tall plant.

The festival is meant “to maintain our heritage,” said Mr. Gholston. “A lot of Black folk will tell you, ‘I don’t eat that mess, man.’ It has connotations of poorness and rural.”

Although pokeweed’s leaves, berries and roots are poisonous to varying degrees, many rural Americans once soaked, boiled and sauteed their leaves into poke sallit (possibly a derivation of “salad”), akin to collard greens. The toothsome dish can send an eater to the hospital if its toxins aren’t neutralized. Few people know how to cook it correctly now, and fewer dare; Mr. Gholston, who perfected his technique by drawing from family tradition, is an exception.

“My mom would wash it, cook it,” he explained. “Some relatives would serve it for Sunday meals. Others would take it as kind of a spring tonic. Older people back in the day used to take the berries and make wine. People have taken the stalk and fried it like okra.”

His emphasis on Black self-reliance aligns with newer generations of Black explorers. I thought about his ingenuity when I met Ms. Nelson in Jeffrey Park, a Columbus estate turned public resource. Ms. Nelson is a virtuoso of the woods. A walking, talking compendium of botanical factoids and zany zingers, she encourages fans with her cheeky-but-serious prayer for foragers, “Don’t die!” and her trademark gaptoothed smile.

What you don’t see in her videos are how closely she looks at trees before she ever touches them, how gently she plucks their leaves and how often she doesn’t take anything at all.

We are officially back outside! R.S.V.P. now to join us as we explore moments in nature for the third episode of the yearlong event series Black History, Continued.

Two deer darted in front of us as she picked up black walnuts from a downed tree branch. It never hurts to follow and see what they’re looking at, she said. But I noticed that the animals were cavorting behind a colossal mansion that backs up to the woods. Thinking of the film “Get Out” and one character’s early warning to not be alone in the woods with white people, I asked how comfortable she feels.

“I do like dressing up and wearing full makeup. Because who doesn’t want to prance through the woods and feel like a woman fairy? But some of it is definitely about looking super-approachable,” she said. Hoodies are off the list of her approved foraging apparel, exchanged for staid cardigans, even in the chilly Midwest fall.

Imagining oneself as a wood nymph wearing a bold lip and loud peasant dress doesn’t totally ward off unwanted attention. Ms. Nelson noted that she has been stopped semi-frequently by random white people and rangers.

This is a common complaint of Black people exploring in nature. Widely publicized incidents in 2020 — a Black birder was falsely accused of threatening a white woman in Central Park, and a Black man was attacked while hiking in Indiana — are extreme examples of the sorts of routine encounters foragers say they face.

Mr. Robinson said he once stopped his car to take a look at a stand of colic weed across the highway; minutes later, law enforcement arrived to investigate a theft. “I don’t know if that was made up or not, but I was literally in an open field,” he said. “I doubt anyone except biblical thieves are digging holes in a field to hide their goods.” A short conversation later, he headed home safely.

Fushcia-Ann Hoover, a hydrologist who published “A Black Girl’s Guide to Foraging,” forages in her Annapolis, Md., neighborhood, where she’s well-known and makes a point of taking her sister’s adorable Shih Tzu dog with her. She cited cases in which Black campers were assaulted by white people in the outdoors. “If it’s so dangerous or risky, then maybe it just becomes easier to say, ‘Oh, that’s just not something we do,'” she said. “So then you don’t feel the loss.”

Similarly, Lady Danni Morinich, a 57-year-old former ad salesperson in Philadelphia (her title comes from a tiny parcel of Scottish land that friends gave her as a humorous gift), runs a business selling teas, tinctures and other products sometimes made with foraged herbs. She doesn’t romanticize the fact that she’s often the only Black person at a wild-foods meetup, or the possible consequences of carrying a folding knife into the field: “I tell other folks, ‘Sometime, you might not want to take that.’ Because you can get killed being Black while walking.'” 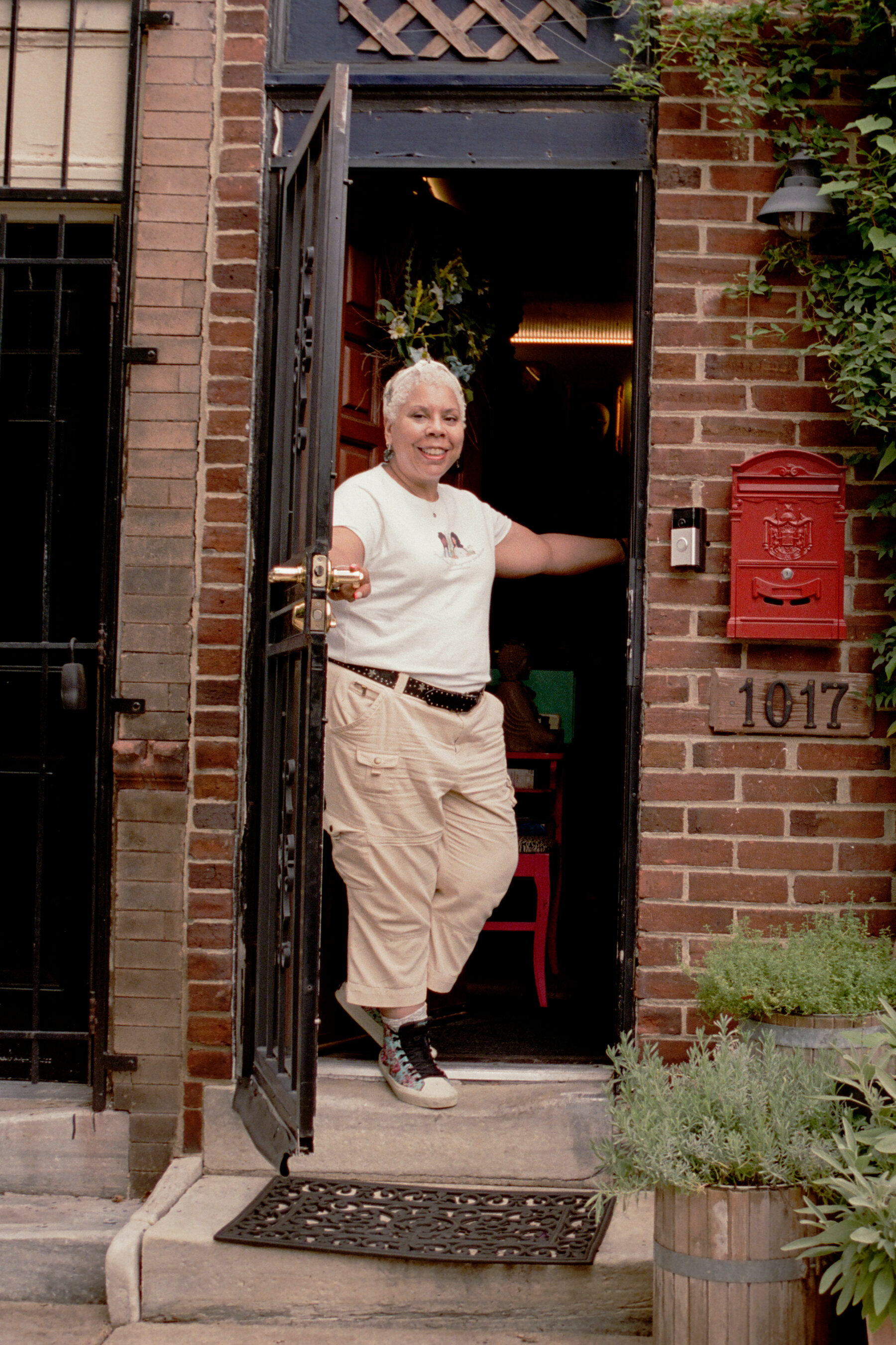 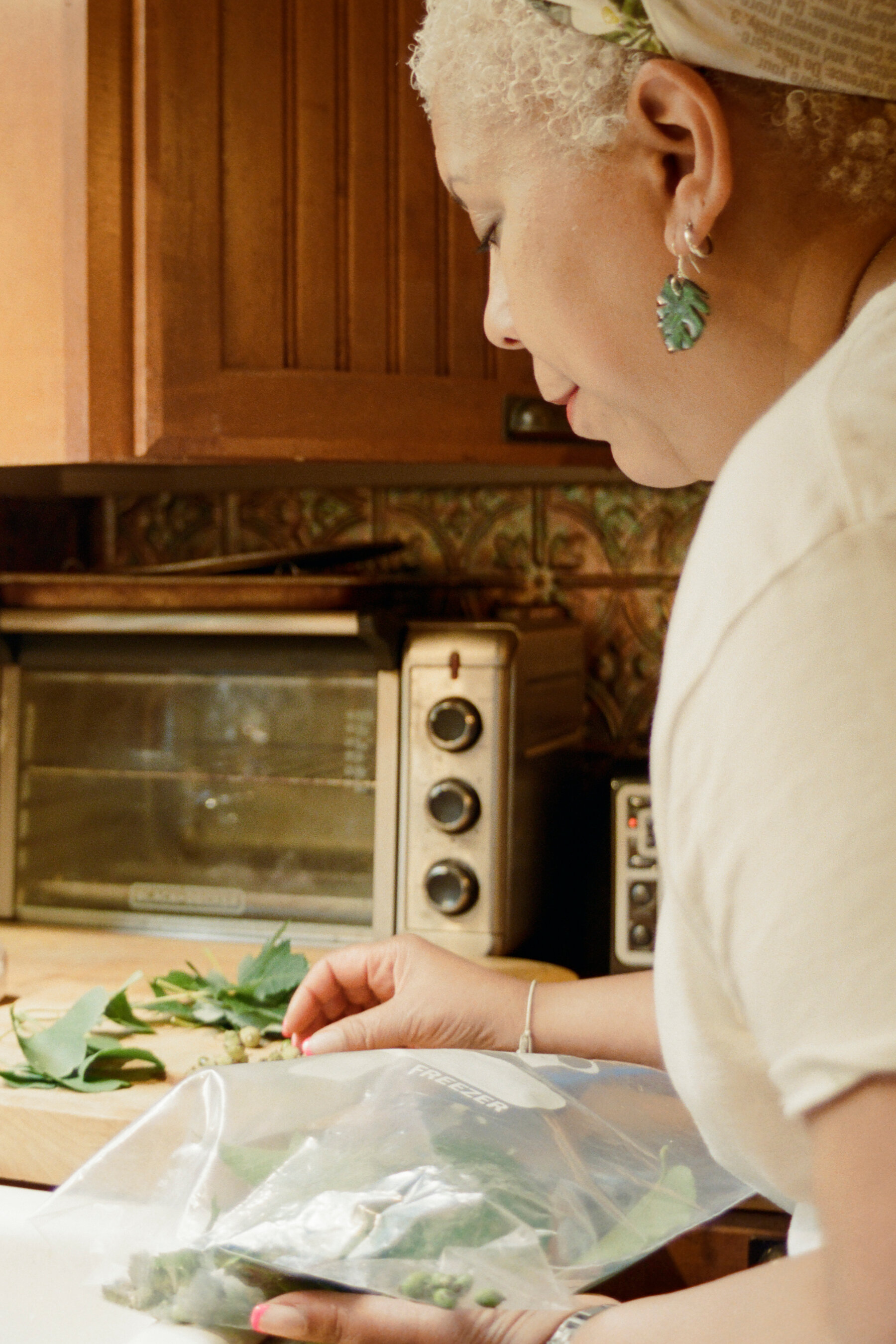 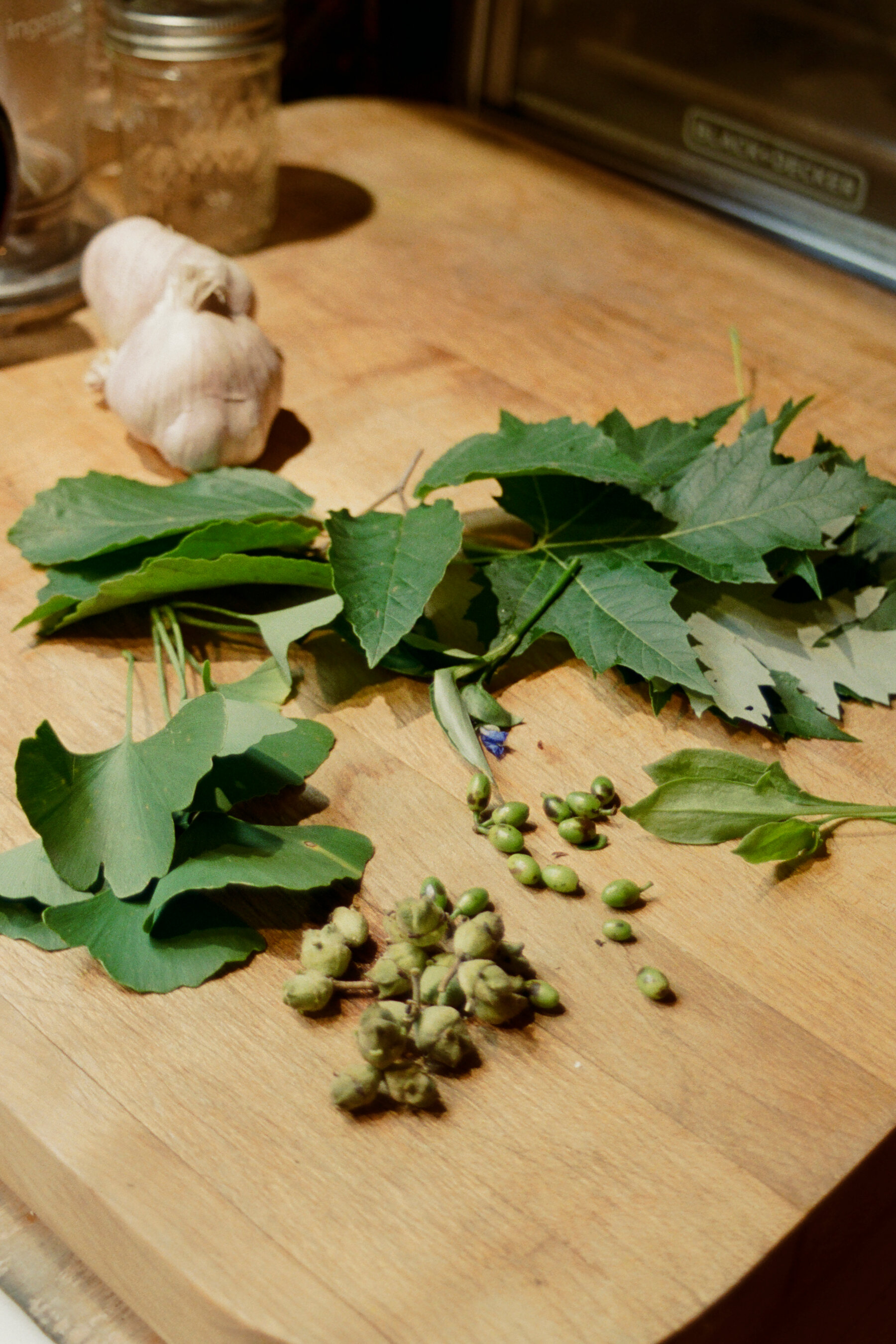 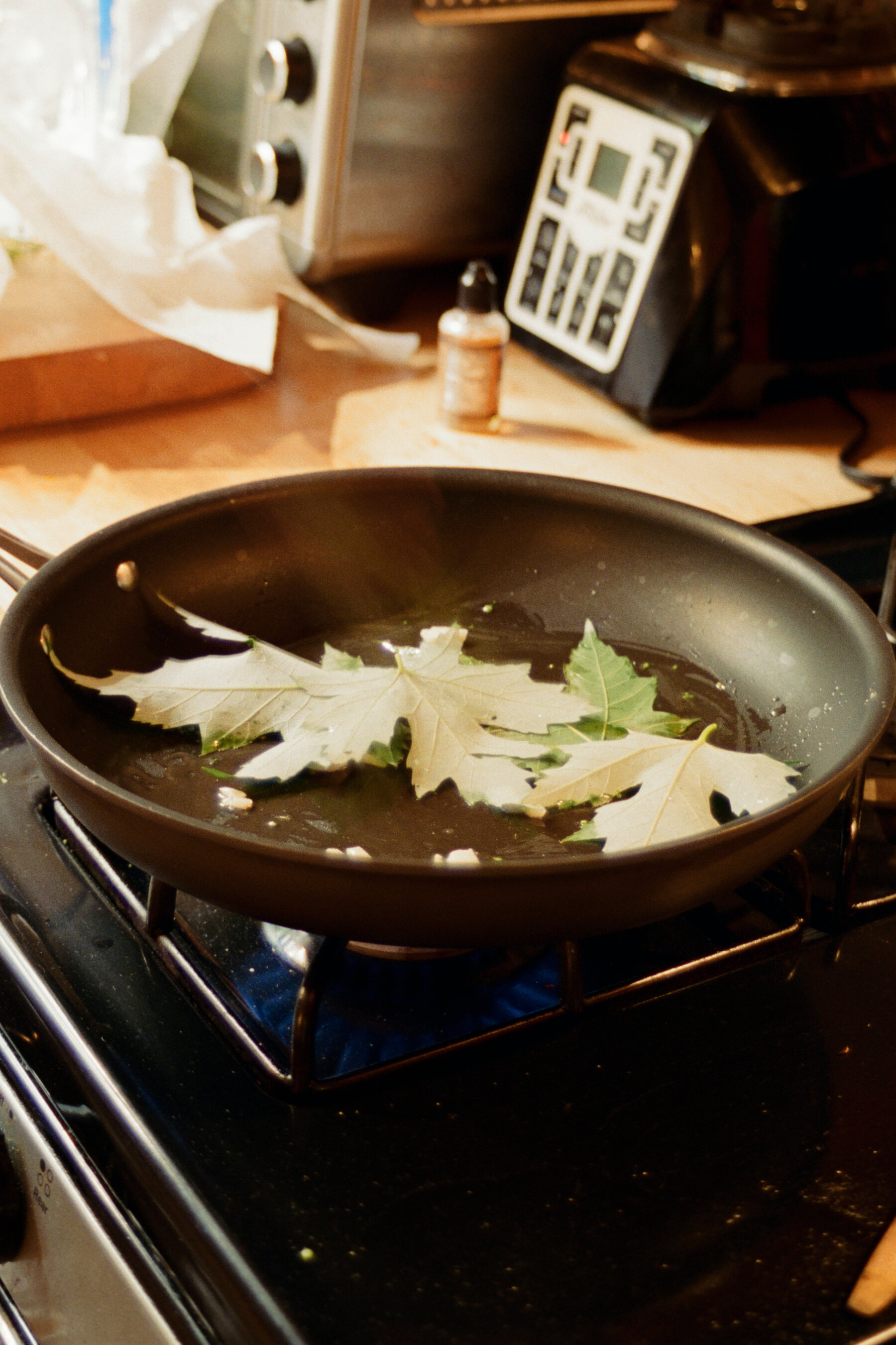 Black foragers do find pleasure and even healing outdoors and in bringing their treasures back home.

Separating and cleaning foraged leaves is a gentle process.

And deciding how to use them in a dish takes care and thought.

Maple leaves fried in oil with sliced garlic and sprinkled with salt will turn out crunchy and delicious.

As I followed Ms. Nelson along a winding trail, her eyes darted around the ground, up to the canopy and down again. She pointed out an early pawpaw fruit, gleaming green 20 feet above us. It is one of very few things for which she would willingly tramp through poison ivy, she said.

The others are chicken of the woods and morel mushrooms; she laments she doesn’t have the mycological Spidey sense to spot the latter. Her knowledge, though, does run deep. She is able to identify plants by the shape of their leaves, whether their berries are crowned, the smell of their roots.

At another fork in the path, we stopped at a leaning tree. For mushrooms, an ailing tree is pay dirt. Ms. Nelson plucked a few medium-size brownish-peach wood ear mushrooms. I joked that the hue would make a perfect neutral lipstick for us — two Black women scouting the wilds. She scrunched one of them and held it to the side of her face. Folded that way, it did resemble a human ear, gruesomely sliced, Van Gogh-style.

“My partner hates it when I do that,” she said, giggling. He wasn’t keen on sampling the mushrooms candied in simple syrup, either.

Cooking for others is a major motivation for Dr. Hoover, the Maryland scientist. She has used Ms. Nelson’s magnolia flower experimentations to enhance a stir-fry (they taste like ginger) and flavored water with lemony wild sorrel. She even figured out how to soak acorns, a necessary part of the flour-making process, in her toilet tank.

Her family and friends sometimes roll their eyes good-naturedly at “Fushcia’s projects,” but for her, Black freedom is the larger, continuing project.

“There is power in being able to name the things that are around you and knowing what they can be used for — or can’t be used for,” she said. “I do take a growing feeling of independence from that, especially as a Black person in this country. There’s a part of me that kind of rebels in knowing and being able to take things because the way we are told we’re not supposed to.”