The police in Ohio, who released body camera footage, said the girl had threatened two other girls with a knife before an officer opened fire.,

At a news conference, Michael Woods, the interim police chief of Columbus, said an investigation was underway after Ma’Khia Bryant, 16, was killed when an officer opened fire.

Earlier today, we had a police-involved shooting. Normally, we don’t provide information this soon, but we understand the public’s need, desire and expectation to have transparency upon what happened. Paramedics were called right away. Officers, you can see from the video, the one officer is assessing the young lady for injuries. And then CPR was started. Once we are able to release that full public record to you, you’ll see some additional life-saving measures that were taken by at least two officers that were at scene. Deadly force can be used to protect yourself or the protection of a third person. So that is within the policy, and that is within the law. That is what the law says. Whether this complies with that will be part of that investigation. 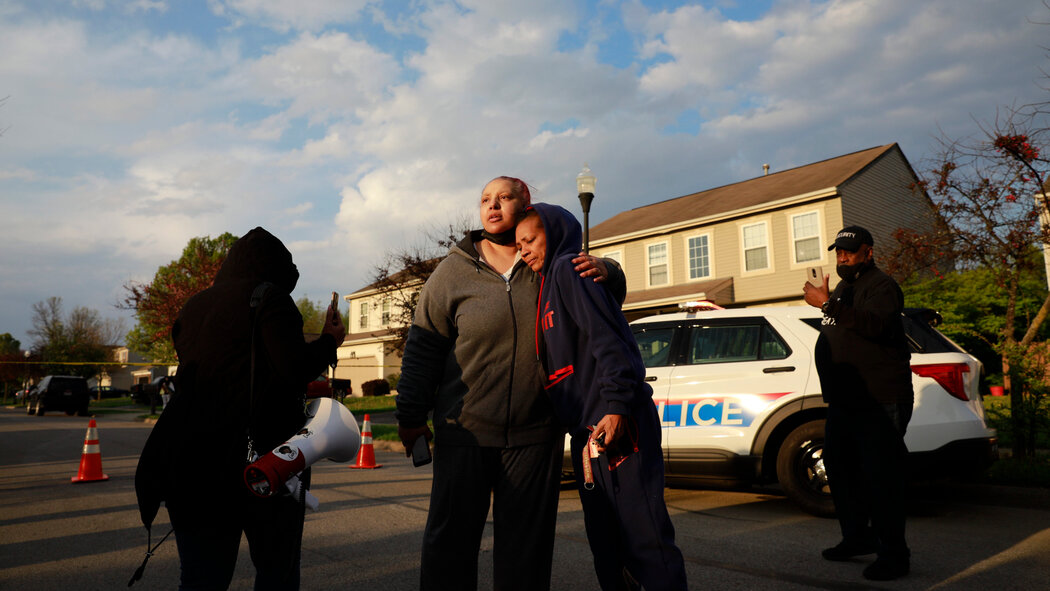 At a news conference, Michael Woods, the interim police chief of Columbus, said an investigation was underway after Ma’Khia Bryant, 16, was killed when an officer opened fire.CreditCredit…Brooke Lavalley/The Columbus Dispatch, via Associated Press

By Neil Vigdor and Bryan Pietsch

A teenage girl who the police say threatened two girls with a knife was fatally shot by an officer in Columbus, Ohio, on Tuesday afternoon, shortly before a jury reached a guilty verdict in the murder trial of the former Minneapolis police officer Derek Chauvin in last year’s killing of George Floyd.

The girl’s death cast an immediate pall over public expressions that justice had been served in Mr. Floyd’s case and touched off protests in Ohio’s capital city.

At a news conference on Tuesday night, the Columbus Division of Police released body camera footage from the officer, who officials said had been responding to a 911 call about an attempted stabbing around 4:45 p.m. in the southeastern part of the city.

The video showed an officer’s view while approaching a chaotic altercation in a driveway involving at least four people, asking “What’s going on?” Played in slow motion, the footage showed a person in a black shirt lunging first at someone who fell to the ground, then moving with what appeared to be a knife toward someone in pink cowering by a parked car. The officer shouted “get down!” repeatedly and pulled a gun out, firing four shots at the teenager. She collapsed to the ground near the car, dropping the weapon.

The girl who was killed was identified as Ma’Khia Bryant, 16, by a spokeswoman for Franklin County Children’s Services, who said in an email on Tuesday night that Ma’Khia had been in foster care.

“No matter what the circumstances, that family is in agony and they are in my prayers,” Ned Pettus Jr., the public safety director for the city of Columbus, said during the news conference. “They deserve answers. Our city deserves answers. I want answers, but fast, quick answers cannot come at the cost of accurate answers.”

The name of the officer, who officials said has been taken off the street while the shooting is investigated, was not released. The Ohio Bureau of Criminal Investigation will conduct an independent inquiry, which local officials said is standard whenever an officer shoots someone. Earlier on Tuesday night on Twitter, Mayor Andrew Ginther of Columbus urged residents to keep the peace as protesters descended on the scene while the authorities reviewed the bodycam footage that was later released.

“This afternoon a young woman tragically lost her life,” the mayor said on Twitter. “We do not know all of the details.”

A woman interviewed by The Columbus Dispatch identified the victim, who was Black, as her teenage niece. The woman, Hazel Bryant, told the newspaper that her niece lived in a foster home and got into an altercation with someone else at the home.

The timing and circumstances of the shooting unnerved people in the neighborhood. Rayshawn Whiting said in an interview on Tuesday night that he was planning to watch the Chauvin verdict at his brother’s house just a few blocks away when he heard the gunshots. When he saw on social media what was going on, he walked down the street to join the throng of protesters who reached between 150 and 200 people at their peak.

“I’ve got daughters,” he said. “And I’m tired of it. I feel like a polar bear with the ice caps melting. We have nowhere to run. If we protect ourselves, we go to jail. If we don’t, we die.”

Chris Roberts said in an interview that he was in his backyard with his twin daughters when he heard the gunshots from just a few yards away. He said they ran in the house and called 911. Since the shooting, he said, his daughters did not want to be alone.

“How do I teach my daughters when you call for help, and you expect help to come, you could be on the other side of the gun?” he said.

The teenager’s death quickly received widespread attention, including from Ben Crump, the Floyd family’s lawyer, amid a continuing reckoning over police accountability and systemic racism.

“As we breathed a collective sigh of relief today, a community in Columbus felt the sting of another police shooting” Mr. Crump said. “Another child lost! Another hashtag.”

Earlier Tuesday night, when members of the Columbus City Council were discussing the need for a civilian review board for police accountability, Shannon Hardin, the council’s president, addressed the shooting.

“As we watched the verdict from Minneapolis many talked about a sigh of relief, but there is a truth that for so many in our community there is no relief,” Mr. Hardin said. “This is not right. It’s not OK, and it can’t continue on.”

Michael Woods, the interim police chief of Columbus, said at the news conference later Tuesday night that it was unprecedented in the city for body camera footage to be released so quickly after a shooting by an officer.

“We wanted to get that out as soon as possible,” he said.

Columbus has been gripped by tension over police shootings since early December, when Casey Goodson Jr., 23, was shot to death at the entrance of his home by a Franklin County sheriff’s deputy assigned to a fugitive task force.

Members of the task force had been in the area looking for someone in an operation that had nothing to do with Mr. Goodson.

Two weeks later, Andre Hill, 47, was shot four times by a Columbus police officer who was responding to a call about a suspicious vehicle. When officers arrived to investigate, they encountered Mr. Hill, and one of the officers, Adam Coy, a 19-year veteran, opened fire within seconds. Mr. Coy, who was fired after the shooting, was charged with felony murder in the case.